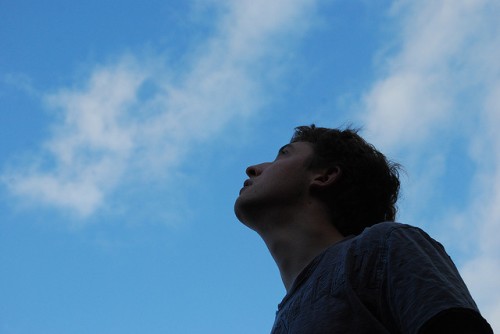 “There are two great powers,” the man said, “and they’ve been fighting since time began. Every advance in human life, every scrap of knowledge and wisdom and decency we have has been torn by one side from the teeth of the other. Every little increase in human freedom has been fought over ferociously between those who want us to know more and be wiser and stronger, and those who want us to obey and be humble and submit.”

Physicist Marcelo Gleiser tries to square religion with science by arguing that both are ways to approach the question of the “Three Origins” — of the universe, of life, and of mind. Like advocates of poetic atheism, Gleiser points out that the availability of natural explanations of the universe

…doesn’t mean that understanding the three origins would eliminate our spiritual connection with nature and with each other. On the contrary, our understanding of the world should only strengthen our spirituality. The belief that explanations of the natural world remove us from it has no foundation. Rationality and spirituality are complementary aspects of our humanity.

If we are to look for common ground in the scientific and religious modes of understanding, it is in the fascination we all share with the mystery of creation. Religious or unreligious, we ask the same questions.

This is true. But the difference is in how we answer those questions. Gleiser conflates spirituality with religion, when actually they are two distinct attitudes. Spirituality is a sense of awe and wonder, a deeply felt connectedness with the larger universe beyond oneself; certainly there’s no reason why it can’t be compatible with a scientific outlook. (In fact, it should be.) Religion is something else entirely: an unjustified certainty about ultimate answers that is antithetical to science’s curiosity and willingness to admit ignorance. Gleiser illustrates the scientific spirit:

Science has come a long way toward elucidating many of the mechanisms behind all three origins. In the past 400 years we have learned a great deal about the universe, about life and about the mind. These are very exciting times, when progress along all three questions is happening very fast. But we should also add that we still don’t know how to answer any of them. This should not be seen as a defeat, but as an ongoing challenge.

Which is precisely the opposite of what religion does. Science welcomes questioning; religion discourages it. Scientists are always testing even long-established theories, and occasionally revise or overthrow them; religion holds fast to sacred texts that cannot be questioned. Both science and religion claim humility and ignorance, but the quality of humility in each case is different. The humility of science is coupled with a desire to learn more: “We don’t know, but we will try to find out.” The humility of religion, on the other hand, is paired with an arrogant certainty about first causes that require no further examination: “We don’t know because we can’t know — and in any case, the answer behind all mysteries is God.” Doubt is a virtue in science, an attitude to be constantly maintained; but for religion doubt is a flaw, a problem to be wrestled with, an obstacle on the way to unshakable certitude.

I’m not saying, of course, that all believers are by-the-book fundamentalists. Most of us exist in the gray area between science and faith, tending more towards one or the other, negotiating between the two world views — but as I’ve argued, this isn’t due to science and faith being inherently compatible as much as to the human mind’s ability to hold two contradictory ideas at the same time. (And how we’ve evolved that capacity is perhaps a matter for cognitive science as well.)

Gleiser concludes with a call for more kids to be scientists:

How far down can we go in understanding the three questions is material for future posts. Hidden here are questions on the nature of knowledge and the limits of what we can know. But to deny our progress is a terrible mistake. In fact, open questions should be presented as the reason why we need more scientists, why a child should be interested in becoming a scientist. So many mysteries so little time.

I would just add that, as Neil deGrasse Tyson says, children already are scientists; the question isn’t how to make them curious about the world, but how to keep them that way. In the quote that begins this post, Philip Pullman describes two forces, two paths that children can take: should they go down the path that encourages knowledge and curiosity and freedom, or the path that commands obedience and submission? I think the future of the human community depends on that choice.

One response to “Thriving on open questions: science, religion, and spirituality”